A man has been arrested and a woman taken to hospital 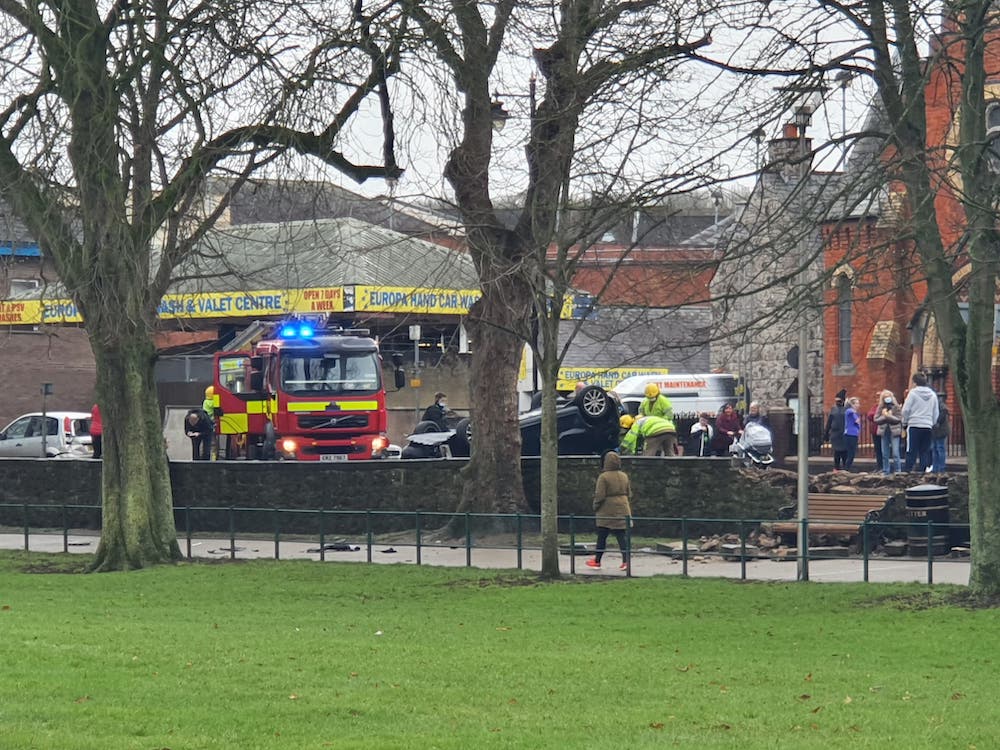 A lorry carrying a pre-fab cabin has shed its load on the Mall West shortly after 12pm.

A car, believed to have two occupants inside, is also on its roof with firefighters currently attempting to free the occupants of the vehicle.

A PSNI spokesperson said: “Police are in attendance at a road traffic collision in The Mall area of Armagh.

“The collision, which involved a lorry, was reported to police at around 12:20pm this afternoon.

“One person, a passenger of one of the vehicles involved, has been taken to hospital.

“One man has been arrested in relation to the collision.

“The Mall is closed off as police deal with the collision, and drivers are advised to find an alternative route.” The collision happened outside the First Presbyterian Church at around 12.15pm, with the Air Ambulance landing in the middle of the Mall to offer assistance.

Chunks of the wall along the Mall are also missing, with the cabin also sitting in the middle of the road. The area is impassable and motorists are being advised to avoid the area.

Paddy Campbell, whose mother had a near miss at the scene, told Armagh I: “Hopefully the two ladies in the car are okay. My mother was waiting in the parking space the black car ended up on its roof on.

“The black car missed her by literal centimetres. If she hadn’t have moved when she did she’d have been crushed by the car.”

DUP Councillor, Alderman Gareth Wilson, commented: “My thoughts are with those in the small car which has been overturned and I trust that the occupants of the vehicle make a full recovery.

“I understand the Air Ambulance has attended and it is not clear as yet what has caused this serious incident and why the load has dislodged from the lorry.

“I would appeal for anyone who may have witnessed this accident to contact the PSNI and assist them with their inquiries.”