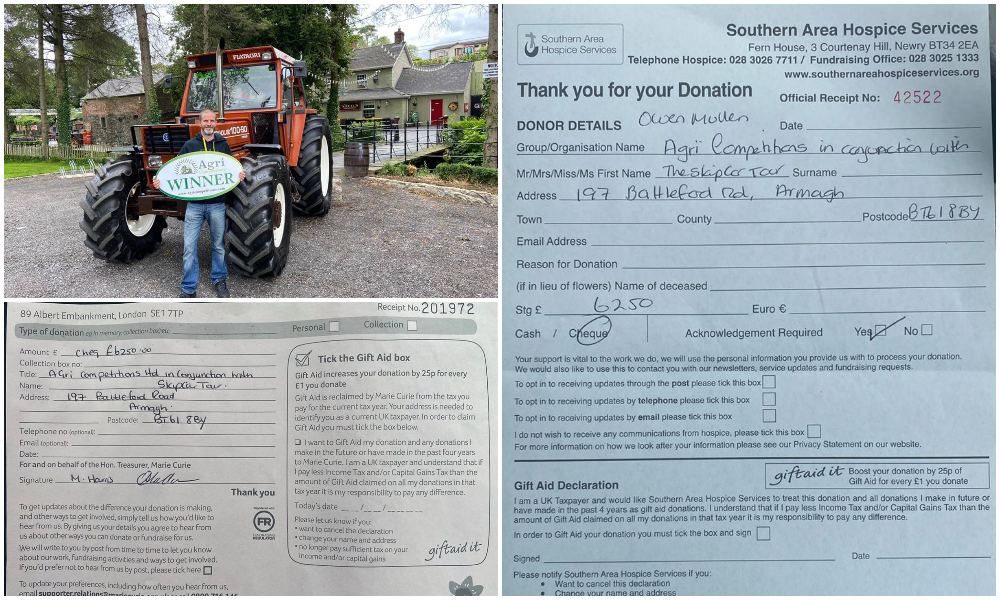 A Co. Armagh-based internet competitions website has released a statement in a bid to set the record straight following a widely-publicised tractor raffle last month.

Owen Mullan and Barry Conlan – the duo behind Agri Competitions – said threats were made against them and their families following a technical glitch around their raffle for a Fiat 100-90 tractor.

The duo were selling tickets for the tractor, with all proceeds set to go towards Marie Curie Cancer Care and Southern Area Hospice Services.

However, a technical glitch on the night of the raffle went viral and accusations the duo were operating a scam gathered steam as a result.

Since an explainer video the following evening, the owners of Agri Competitions had remained silent.

But on Saturday night, they released a detailed statement outlining their version of the mix-up, with accompanying evidence.

They addressed lag times with the American App software, also backed up with a response from the company, as well as an online video from Underground NI accusing them of being scammers.

Furthermore, they produced evidence that £12,500 was split evenly between the two charities and that the winner – following a re-draw – received the tractor.

Their statement in full:

“I would firstly like to thank all of our customers for their patience awaiting our statement regarding the draw for the Fiat 100-90 tractor. As you will see from the information we set out below we have instructed both an independent technical expert and been in contact with the American App designers of the software we were using. They have fully explained how the error occurred.

On the 26th of June we conducted a draw for the Fiat 100-90 tractor. This draw unfortunately did not go according to plan due to a software issue and we took the decision to void the draw and re-run the draw straight away as we believed it was the fairest option to all who had entered. We subsequently received vast amounts of bad publicity accusing us of being scammers and threats were made towards ourselves and members of our families. In particular a Mr Glen Robertson from Underground NI App posted a video allegedly showing how we were operating a scam.

The True Facts Are:
1. We were running the competition to raise money for two charities. The proceeds after the cost of the tractor were donated to Marie Curie Cancer Care and Southern Area Hospice. We are delighted to have raised the fantastic sum of £12,500 and were able to donate £6,250 to each charity. We and the charities would like to take this opportunity to thank everyone who entered and helped raise this much needed funding for these great charities. 2. We ran the draw again and selected the Winner Paul Holland from Co. Galway who we do not know or have any affiliation with. Paul was presented with the tractor and was delighted with its condition and is already putting it to good use. 3. Immediately after the draw we instructed an independent tech expert and solicitors in London to examine precisely what had gone wrong. They instantly highlighted the fact that we were using two screens as a potential explanation for the malfunction. The two screens were connected through a highly respected App called DUET DISPLAY INC. and the tech expert contacted the developers of the software in the USA.
DUET DISPLAY INC confirmed that the issue we had experienced during the course of the draw was in fact caused by their software and was nothing to do with either human interaction or our hardware. Please see their report below:

Thanks for your patience! We’ve tested out the issue on both Mac and PC in different settings and discussed the issue with the development team. Here is the explanation of it: Duet captures the image of a “host” device display to be able to send it to the mobile device and it’s done in a form of generated frames. The issue you’re experiencing could very likely be related to the way any display is going to see frame updates flushed out into screen recording software. On Mac we only get a new frame if the OS tells us about it, and it will skip a frame itself if we’re still processing the previous locked buffer. Duet has the algorithms to force some extra frame captures but that doesn’t mean they’re going to catch something that’s going by in a fraction of a second. Which means the update isn’t going to happen until a key frame itself is generated, and that’s not going to happen instantly because those are much much slower than non key frames. So it’s a performance trade-off there – to be able to catch some of these cases with missing frames is going to impact performance in other situations and software will work much slower.
Because the random generator is an animation which is a frame sequence, sometimes the software misses the frame and shows a number on the way to the generated number. Therefore, if you use a random number generator that doesn’t have an animation or moves anything else on the screen, it will be shown correctly. Please let me know if it answers your question or if you have any further questions. Best regards, Vlad, Duet Display INC

4. We also contacted an independent Tech expert who reviewed everything we carried out, our operating systems and software. They confirmed that the issues arouse from the software used from Duet Inc. They also provided a simplified version of Duet Display Inc report.

It’s all due to the fact that the clients were using two screens. The main screen sends a picture of itself to the second screen and because the first screen is updating so fast, the second screen can sometimes fall out of sync. This is because the second screen is still drawing the picture of the first screen when the first screen sends the next picture through so it can’t draw it quickly enough, this is also represented in the video supplied by the client that in that this happens on multiple occasions and is not unique to that draw alone. The only way to solve this is to change to a different random number generator that doesn’t update the screen so quickly and to maybe use an alternative screen sharing platform. If you require anything more specific on this aspect please do let me know. Yours sincerely, Alexander Sawyer, Managing Director, Quaestio Intelligence Services Ltd

5. Mr Glen Robertson from Underground NI posted a video accusing us of being scammers on the 28th of June. We provided Mr Robertson the true facts of what happened during the course of our draw and the supporting evidence from Duet Display etc. He has now given us a full apology both verbally and in video format. He regrets having jumped to the wrong conclusion and admits he like so many others should have waited until he had all the facts before making any decisions as to what happened during the course of the draw.

A statement in regards to the video that was posted looking into Agri Competitions: