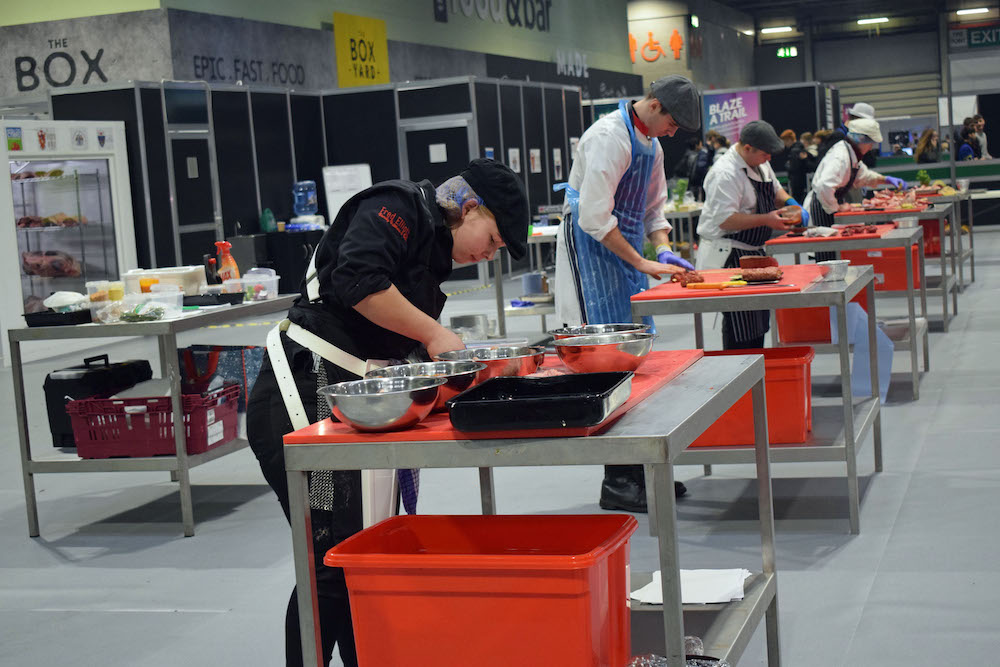 Butchers in action in the 2019 Butchery WorldSkills UK competition final

Two young County Armagh butchers have made the final of the prestigious WorldSkills UK competition.

The seven finalists for this year’s Butchery WorldSkills UK competition were announced following virtual heats where butchers were judged online from their workplace or home.

Seven butchers from across England, Wales and Ireland will be seeking to win the competition, which will be held for the first time at Reaseheath College, Nantwich on November 11 and 12.

Both Jason and Codie-Jo were finalists in 2019, Jason finishing third in the competition which was won by Stefan Rice from Cannock.

Ethan will be competing against his manager Ben Tindale who has worked in the industry for 15 years. Ben decided to enter the competition to increase his experience of competitive butchery.

“I found the heat to be as difficult as expected and thoroughly enjoyed the experience,” he said. “I would definitely recommend entering the competition to any individual within our industry who feels competent and would like to challenge themselves further.”

Ben Roberts, a member of the Craft Butchery Team Wales, has worked in the meat industry for 12 years and manages a thriving shop.

“I have wanted to compete at WorldSkills for several years but, until this year, have always struggled to dedicate the time needed to the competition to make it possible,” he said.

“I have been selected to represent Craft Butchery Team Wales at the World Butchers Challenge next September 2022 and the WorldSkills competition will allow me to develop key skills and experience to take forward to this global stage.

“Hopefully the skills and experience I gain from both competitions can be brought back into the business and one day allow me to run my own shop.”

Poor wi-fi at his workplace, persuaded Richard to arrange for the heat to be filmed live in his home kitchen and the judges said he did really well.

The finalists were selected after virtual heats, held at their workplaces, judged by independent consultant Viv Harvey and Keith Fisher, chief executive of  the Institute of Meat. They are looking forward to judging the final live.

Viv explained: “I was unsure how we could judge constructively from a distance but, following some good team meetings, a trial run and some guidance, ZOOM came through.

“The team arranged for each of the competitors to work in front of two cameras, which gave us good front and side views of their knife skills. It worked really well. The competitors handled the situation well and their standards were high.”

Organised by pan Wales training provider Cambrian Training, the Butchery WorldSkills UK competition is supported by an Industry Steering Group and sponsored by The Institute of Meat, The National Craft Butchers, The Worshipful Company of Butchers, Hybu Cig Cymru/Meat Promotion Wales and supported by FDQ.

The competition focuses on the essential skills required for a successful career as a multi-skilled butcher within the food manufacturing industry. Butchers are tested for overall skill, innovation, creativity, presentation, work ethic, method and approach to tasks, carcass and primal utilisation, waste and safe and hygienic working practice.