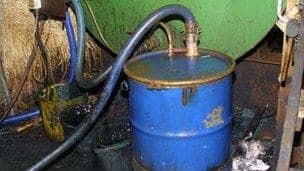 A man from Northern Ireland has been arrested in County Monaghan after the discovery of two fuel laundering plants.

The man, who is 27 and from Armagh, was arrested after an Irish Customs raid in Killyneill, less than a mile from the border with Northern Ireland.

He is being questioned in Monaghan garda station.

The plants were in a private yard and a commercial premises.

They had the capacity to launder six million litres of diesel a year and could have cost the Irish exchequer 3.5m euros (£2.9m).

A diesel laundry was found at one of the premises when it was raided by customs officers last year.