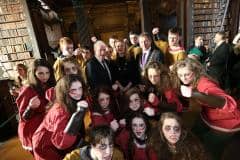 Representatives from Armagh City and District Council were at Trinity College in Dublin this week to officially launch a major programme of festivals and events to commemorate the life and times of one of Armagh’s most historic figures – Brian Boru – and to mark 1,000 years since his death.
The events will run throughout the year at locations across Ireland which have close associations with Brian Boru – the High King of Ireland, who is buried within St Patrick’s Church of Ireland Cathedral in Armagh.
Included in the Millennium Festival calendar is a series of family-friendly events, such as the re-enactment of the largest ever medieval battle to be staged in Ireland, in Clontarf, the reconstruction of an original Viking tented village on the Mall in Armagh, a ‘Viking Big Dig’ event in Dublin, and a ‘Féile Brian Boru’ celebration in Killaloe, County Clare.
The programme has been compiled by a steering group of community and voluntary organisations and a variety of cultural institutions working with Dublin City Council, Tipperary North and South County Councils, Clare County Council and Armagh City and District Council, with the support of the Department of Arts, Heritage and the Gaeltacht and the North-South Ministerial Council.
Lord Mayor of Armagh, Councillor Robert Turner, said: “As the final resting place of Brian Boru – as was always his wish – the ancient Cathedral City of Armagh has a vital role to play in the millennium celebrations.
“On behalf of every citizen in Armagh, I’m delighted and proud to be playing such an important part in this exciting anniversary festival of events.
“To commemorate the 1,000 years since the death of Brian Boru and to mark this significant period in Armagh’s history, a series of local events are planned, which include a full warrior re-enactment, Viking long-boats, a Viking village, church services and a variety of musical performances.
“This is a unique opportunity for everyone to learn more about one of our most important historical figures and to commemorate and celebrate his life.”
The island-wide programme of commemorative events will centre on four key locations with connections to the life of Ireland’s best-known historical medieval figure: Cashel, where Brian was crowned High King of Ireland; Killaloe in County Clare, which was the seat of Brian’s High Kingship of Ireland; Clontarf, where Brian was killed following his victory over the Viking rulers of Dublin at the Battle of Clontarf, and the City of Armagh, where Brian was finally laid to rest as was his wish.
The bones of the High King of Ireland, Brian Boru, who defeated the Vikings in 1014, are said to be buried in the North Wall of Saint Patrick’s Church of Ireland Cathedral, Armagh, which dates back to medieval times.
Brian, by his victory at Clontarf on Good Friday, 1014, delivered a final blow to Danish power in Ireland. He lost his life in the battle and his body was brought to Armagh, where it lay in state in the Cathedral for 12 days before burial.
Speaking about the year ahead, Lord Mayor of Dublin, Oisín Quinn, said: “The series of commemorative events will stimulate a renewed interest in Ireland’s medieval history, the enduring fascination with Brian Boru and his role in the emergence of Dublin as the capital of Ireland.
“Dublin City Council welcomes this opportunity to work with other local authorities and we look forward to the development of a successful North-South tourism initiative.”
The official festival website  www.brianborumillennium.ie will host the full programme of events and will go live at the end of January.
Pictured: Lord Mayor of Dublin, Oisín Quinn, Sara McGeary, Tourism Development Officer at Armagh City and District Council and Minister for Arts, Heritage & Gaeltacht, Jimmy Deenihan,T.D, at the launch of the Brian Boru Festival 2014.
RelatedArmagh City and District CouncilBrian Boru