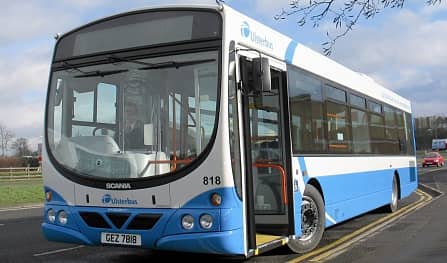 Bus services in Armagh city could be completely scrapped due to severe budget restraints being placed on the Department of Rural Develeopment.

Armagh city will be among 13 other towns across the Province that could be affected with complete service removal. Seven other towns could have services severely limited.

Within those seven, Lurgan, Portadown, Newry and Dungannon are all included.

Rail services are also expected to be hit hard, with the likelihood of fewer trains running between Newry and Portadown.

The Department has been ordered to make total savings of £65m which could lead them to selling some car parks and raising the price of public transport.

Services connecting towns and villages could also be hit, although Translink has insisted the proposals are in ‘draft’ form.

Transport Minister Danny Kennedy has accepted that “very difficult decisions” have to be made as a result of budget cuts.

Meanwhile, councillors and local MLAs have been very quick to voice their concerns to Armagh I, over a move which is being branded an “utter joke”.

Independent Unionist Councillor Paul Berry has hit out at the prospect of such dramatic cuts and accused Stormont of an “inability” to govern.

Speaking to Armagh I, Councillor Berry said: “I am totally and utterly shocked by this DRD proposal to remove such vital public transport services from Armagh City and indeed in other towns across Northern Ireland.

“To think that such a provision could be removed from a ‘city’ is just unbelievable and really hard to take in for me and, indeed, the city and district as a whole.

“This city is constantly being stripped of vital services and it seems that the Stormont government look upon Armagh as the poorer cousin.

“This proposal will be fought tooth and nail by the city and district and I am totally opposed to this mad and ridiculous proposal by DRD Translink.

“The root of all these cuts emanates from Stormont and, whilst there are individual Ministers bringing forward such proposals, I feel that the mess up at Stormont is to blame for these constant announcements and inability to govern this country.”

He told us: “Today’s proposal by Translink to end town services in 13 towns across the North, including Armagh City, is a new low for devolved government in Northern Ireland and this proposal must be withdrawn immediately.

“I understand this is a proposal by Translink at a regional level and very little detail is known at a local level, which only adds to my concerns.

“The town service runs every other hour and does a complete loop of the town, picking up people from the housing areas on the outskirts of Armagh City and bringing people into the centre of town.

“This is a vital service for those who live in these areas, particularly the elderly and those who don’t drive.

“But in addition to this is it is also vital to the economic life of the city; if these people cannot get into town, there will be an obvious impact on our retail and hospitality industry.

And Councillor O’Hanlon makes a stark forecast, as he warned: “I think this is just another tip of the iceberg. The next thing we will be told is there isn’t enough money to run services to isolated rural communities.

“I really think that some of these proposals are a joke. Sometimes I think Stormont would prefer if we all stayed at home, then they wouldn’t have to provide public transport, they wouldn’t have to fix street lights, potholes or use any education or health services and then they could just continue to hack away at vital front-line services or, better still, they could spend all the money in and around Belfast and never mind anything beyond the M1.”

Lord Mayor of Armagh City and District, Councillor Cathy Rafferty, told Armagh I that “available, accessible and affordable public transport was an essential right for all”.

“Once again our communities and, in particular, the most vulnerable members of it, are being told that they will be deprived of an essential service,” she said.
“Available, accessible and affordable transport is an essential right for all, not a luxury, and that is the message myself and my Sinn Féin colleagues will be giving to Translink.”
Sinn Féin colleagues at Stormont are demanding an urgent meeting with Translink’s top brass.

Newry and Armagh MLA Cathal Boylan has said he and Mickey Brady wanted to discuss with senior management the consequences of the proposals for both cities they represent.

Although  acknowledging the difficult economic conditions faced by many agencies, Mr Boylan said the loss of such services to Armagh and Newry would be “a devastating blow”.

“Translink, like many other departments, agencies and businesses, no doubt are facing reduced revenue grants, but there has to be a balance when decisions about withdrawal of services are being made,” he told us.

“Urban services in particular are important. They are essential to combat social exclusion, and help create better mobility and access to facilities for all.

“Older people in particular need access to essential services. Many households have no car and many even in car-owning households do not have access to a car, or are too young or too old to drive one.

“Buses enable non-drivers to access jobs, shops, education, training and services. They also help create less traffic within the urban environs, thus reducing logjams. Cuts in services to the public must be a last resort, not a first option.”

Newry and Armagh DUP Assemblyman William Irwin has challenged Regional Development Minister Danny Kennedy to “get to grips with his Department”.

Mr Irwin told Armagh I tonight that removing the bus services from Armagh City and other towns would be “hugely detrimental to those, including the elderly, who rely on public transport across the Province”.

And he continued: “Indeed I am surprised that Minister Kennedy appears content to allow this type of cut to even be discussed and, obviously, potentially implemented, given that it is currently in a ‘draft’ form.

“I have concerns about Minister Kennedy in his control of the Department of Regional Development as he appears to issue warnings almost weekly on areas he is considering making cuts.

“Indeed, we have in the past few weeks had a number of doomsday proposals coming from him, including turning off the street lights and stopping winter road gritting.

“In other Departments there appears to be a much more considered approach to the issue of efficiencies and I feel it would serve the Minister better to take a more rational approach to his spending responsibilities.

“Danny Kennedy needs to get to grips with his Ministry, especially given the fact that he has very clear public safety responsibilities in terms of providing road gritting and street lighting, amongst other frontline services.

“Bus services are vital and I would challenge Mr Kennedy to end speculation and set out exactly how he is proposing to take forward his budget.”

Others facing a serious cutback of services are Antrim, Ballymena, Bangor, Dungannon, Lurgan, Portadown and Newry.