Approval given for Killeavy Castle to be transformed into hotel 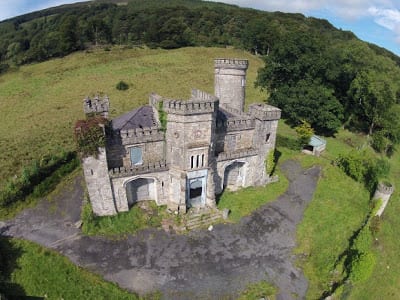 South Armagh is to get a new hotel – and upwards of 90 jobs – as part of a major new development.

The hotel project is at the now dilapidated Killeavey Castle, the construction of which dates back to 1810.

The castle – also known locally as Bell’s Castle, as it had until recently been in the ownership of the Bell family – will now be restored to a 40-bedroom hotel, providing a huge boost for tourism in the area.

Plans for the development will be formally approved when Planning Service officials meet with Newry and Mourne District Council early next month.

The castle is set in a 330-acre estate and was bought by current owners for almost £1.2 million in March 2013.

He said: “This application will come before the Council’s Planning Committee on the 9th February and I know that it will be championed within the chamber.

“There is great excitement in the locality relating to the planned development of this historic building on an incredible site nestled at the foot of Slieve Gullion.

“With the project will come many jobs for the area and an increased profile for South Armagh.

“Whilst this dovetails perfectly with the new council’s plans for tourism development within the Mournes and Ring of Gullion regions, it is unfortunate that the present new council name does not reflect this. Hopefully common sense will prevail on that issue and Gullion will be included.”

The councillor said that the local community were hugely excited about the castle project.

“Having played in the grounds as a child I understand the attachment felt by residents of the area for this captivating setting,” he said.

“It was obvious that this project would increase the growing interest in tourism in this area and  enhance the experience of visitors to South Armagh.

“This is another step on the path to making this a top destination for tourists.”

Mr Bradley also revealed that he has held numerous meetings with both Mark H Durkan and former Environment Minister Alex Attwood with the agent Pat O’Hagan of Patrick O’Hagan Associates, Newry as part of the process to bring the hotel plans to this stage.

Mr Bradley explained: “Killeavy Castle is a historic building in South Armagh and I am delighted that the proposals are being presented to Newry and Mourne District Council on 5th February as an approval.

“This has been a very rigorous process to get to this point given this is a historic building and all efforts have been made to ensure the building and character of the building is preserved as part of the development. “Nestled in the heart of South Armagh, this hotel brings a huge economic and regeneration scheme to one of the most scenic and idyllic parts of this island. As the economy comes out of recession, I hope that this hotel will be able to capture the imagination of tourists and that they will come to stay in what is a beautiful part of the world.”

Headded: “I am in regular contact with the applicant who lives in Australia and indeed his agent Pat O’Hagan in Newry. We have held numerous meetings with the range of stakeholders and government agencies involved including the Environment Minister Mark H Durkan who has been very supportive of the project. Now that we have reached this milestone, I like many in the local community look forward to construction beginning in due course.”

“Killeavey Castle is a beautiful historic building however it has got into a terrible state of disrepair over recent years and the community have been keen to see it restored and brought back to life, with this proposal not only will it be brought back to life but it will help breathe new life in to our local economy,” said cllr Donnelly.

“I want to place on record my thanks to all involved in bring the proposal to this point, particularly SDLP Environment Minister Mark H Durkan MLA and his Planning Staff. This project was treated as a priority given the huge potential economic impact on South Armagh.

“I am deeply proud of South Armagh and its people and was delighted to bring the former Environment Minister Alex Attwood MLA to the site last year to meet with the design team and explain the huge economic potential to the area. I look forward to work commencing on site, and ultimately the new hotel opening in due course.”