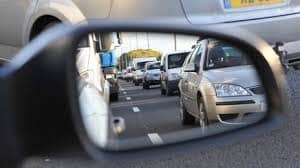 Work will take place on a 1.9km stretch of carriageway at the Northway, from the Seagoe to Kernan Loop junctions.

This will see the current three lanes increased to four and initial work started yesterday (Wednesday) and has led to long tailbacks in the area.

The Minister said: “This is a significant investment in Portadown and involves a major road widening scheme which will result in a significant improvement to traffic progression on this critical link to and from the M1 motorway.

“With over 27,000 vehicles a day using the route, the improvements will benefit not only the wider Craigavon area, but also the many motorists travelling from the Armagh area.

“Initial work on a new drainage, vehicle restraint system, street lighting and vegetation removal has already started and should take up to eight weeks, weather depending.”

The Minister said: “Work on the main project will hopefully start during the summer, subject to the completion of the necessary land and contract processes. The work will last for approximately 14 weeks.”

As with all improvements of this type the planned dates are subject to favourable weather conditions. Roads Service will keep the public informed of any change.

Roads Service has carefully programmed the works operations and traffic management arrangements in order to minimise any inconvenience to the public.

However motorists should be aware that some delays may be expected and that additional time should be allowed when planning any journeys in the area.